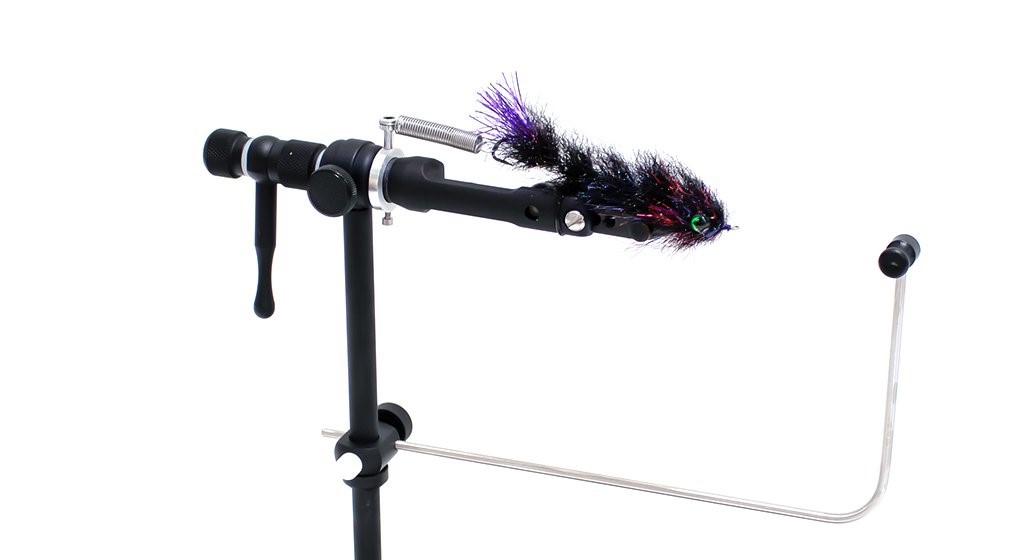 I’ve been tying streamers for a while now, and have encountered numerous challenges over the years. Things like vise stability and wobble, ease of hook placement, jaw capacity and hook grip have all been things that seem to have been taken care of in some way shape or form in modern vise design. A good vise these days will take care of most of these challenges for the tyer. One thing left that I always considered to be a big one for those of us focused on articulated flies is the fact that there didn’t seem to be a product on the market that would secure the back sections of our flies.

I can’t even count the number of times that I’d finish up a streamer session at the bench wondering if I should run to the hospital for a tetanus shot from the multiple barb deep stab wounds to the fingers from that back hook being exposed, armed and dangerous. It’s always been frustrating for me when working on a concept, or trying to crank out a batch of articulated bugs when the back section flops all over the place. Streamer tyers need to see the fly they are tying, and are notorious for constantly manhandling their work. With the back hook left hidden and free to move, there’s always the risk of taking an eye opening hook stab to the finger. I’ve woken up my dogs asleep at my feet many times from squealing due to a good hook stabbing at the bench. Skip ahead a few years to this past August, where I found myself flying down to Florida to meet the Renzetti family for a weekend that Lily (Renzetti) had organized for the ambassadors and staff. It was a weekend that was going to be geared around team building, getting to know the family, and to share innovative ideas and concepts that could make their way into future product offerings.

The whole thing was pretty intimidating really. I mean I was flying blind, coming in solo to sit in a room of legends in the world of fly tying that I had never met, but I thought I had a few viable options to present and who better to hear me out than the Renzetti’s. After a decent flight delay, and a 2 hour drive thru a Florida monsoon to Titusville, I walked into the welcome banquet hours late like a deer caught in the headlights. Lily grabbed me the second I walked into the room, handed me a beer and introduced me to some people I never thought I’d have the opportunity to meet. Partnered up with Kevin Arculeo, we headed back to the condo and stated throwing around some of our ideas we wanted to bring to the table over a few too many pours of rum. Kevin (and maybe the rum) gave me the confidence I needed to pitch the hook holder at the meetings in the days to follow.

The idea was very well received that weekend by the group, and before I left, Andrew (Renzetti) and I worked out a rough concept modification for the Clouser vise from a Master material clip that I could take home and test. The concept was great, and provided a solid solution to the problem at hand. Insert image. We had a modification that provided some range in fly size, a solid connection keeping the back hook in line with the front, and did not impede the rotary function of the vise in any way. Solid! Inspired by Andrew’s rough work, I spent a few weeks drafting a more marketable concept for the hook retainer for both the Clouser and Traveler vises. After submitting the designs, and a few back and forth conversations with Andrew and Lily, Andrew sent me a second round of designs to test. We were now onto something.

The final designs that came out in the wash were as a result of Andy’s input and values. Rather than a full vise redesign, we opted to go with an inexpensive add on option that both new and existing users could benefit from. The hook retainer for the Traveler and Clouser vise was testing well with me, and after a couple conference calls with Andy and Lily to troubleshoot the final details, the new product offering was ready to present at IFTD 2019! So cool! Hell, Kelly Galloup may even retire his rubber band when he gets his hands on this!

Keep an eye out for the Renzetti hook retainer in the upcoming months! It should be hitting the shops this winter, and if you don’t see it, ask your local dealer. If you’re a streamer tyer, you won’t regret this purchase!

You can purchase the Renzetti hook retainer for the Clouser Vise by clicking here.