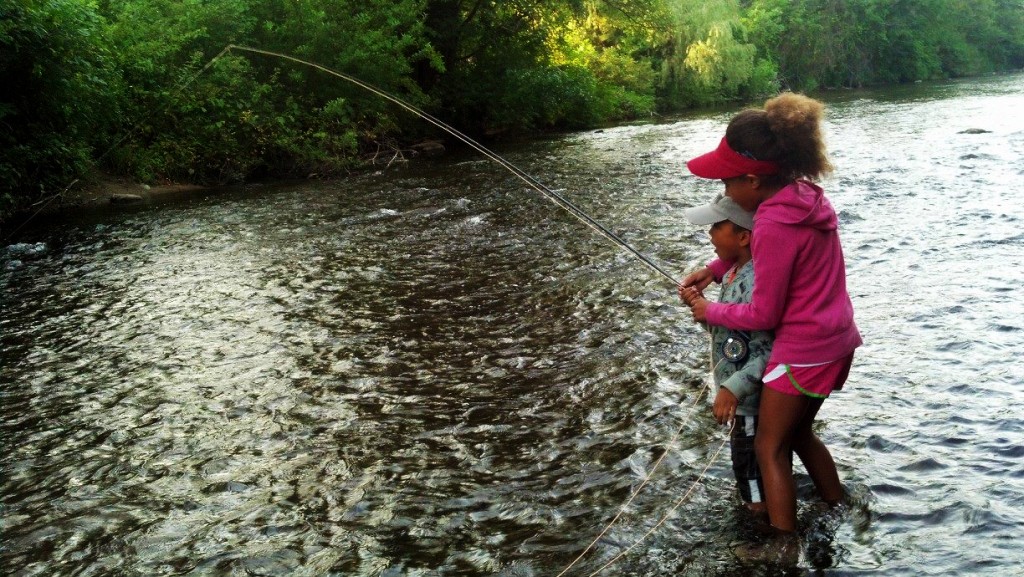 When asked where I was raised, I often answer, “In a boat.” My parents took my us fishing whenever possible. I was probably in my teens before I realized it wasn’t weird to take a vacation not centered around hunting and fishing. Maybe I’m still not fully convinced it isn’t. As a kid, I had no idea how good I had it. All the time spent in the outdoors was just a normal part of life for us, and I wouldn’t trade my upbringing for anything.  When thinking back on my childhood, it makes me feel a little guilty that I don’t take my kids fishing enough. Although, using the amount of time I had on the water as a kid is an unfair standard. I was one lucky kid.

Even when my kids were very young, I would feel the tug of guilt when they would ask if they could go fishing with Dad. It wasn’t very realistic to take them as most of my fishing at that time involved wading in a river. At least that is how I justified it, but I would find ways to get them out as much as I could. Usually a local pond, or maybe some bank fishing on a river. I always made sure to mix in some worm dunking. I think everyone should get the chance to drown worms as a kid. Besides, I don’t want my kids growing up to be fly snobs.

As they grew older, they showed more interest in fishing like Dad. They wanted to wade and fish until after dark.  They would constantly ask how old they needed to be to go muskie fishing.  You know, stuff Dad liked.  Fortunately for us, a local river becomes very wadeable late in the summer. The levels are low and the water is fine for wet wading. The kids loved the initial shock of stepping into 60-something degree water. It never got old watching their reaction either. Like my parents always did (Yes my Mom is a hell of a fisherwomen. She’s made more than a few grown men grumble under their breath after getting out-fished by her.), I tried to make it about the kids. We used a pink bobber, err indicator, at my daughter’s request. I let them pick out flies, I let them cast, I let them bring in the fish, and I let them cause massive tangles that I try to patiently undo…just like my Dad did so many years ago.

Also like my Dad, I never miss a chance to teach. It could be help with casting, how to read a river, or how to spot a cruising a bass. Watching them apply these things gives me a special feeling. I think its one part proud parent, and one part realizing what a lucky kid I was. People will tell me I’m a good Dad because I take my kids hunting and fishing. I guess I never see it that way. I just see it as imitating my Dad, and history repeating itself.