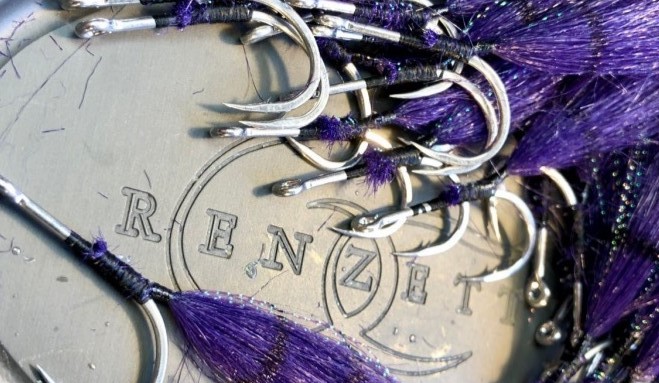 We’ve all been there. Working your way through a favorite run to the prime lie. Floating a river with high hopes of a big fish encountered on a previous trip. Rushing a cast into a tight spot that screams just get it there. You make your shot and the fly fouls. You rip the minnow ball back, just as that fish rolls. As if to say that’s the best you got. Follow along for a couple tying tips that has helped with solving that issue.

Post it, and we aren’t talking about social media. You can post just about any tail from synthetics to naturals. This is a simple step that basically turns your tail into a parachute post. It will not only make for a more efficient fly but also increases durability. Relatively common practice in saltwater flies we rarely use it in freshwater. Flats anglers are often looking for one fish, one shot. I’ve found streamer fishing to be very similar. Sure we may not be throwing to a fish we see every cast. More often than not we aren’t but if you approach every spot with that mindset you’ll be ready for when it happens. It’s often the toughest days that are most rewarding and everything needs to be on point. It could be the one boulder you missed with a fouled fly and didn’t hit again that held the fish you were looking for. Leave no stone unturned so to speak.

Better buggers, with as few as 6 turns of thread you can keep that bugger tail inline. Take note that this often pitches the tail upward and you’ll likely find that tying the tail back a turn or two more than usual is required. We often use the barb as a tie in point for tail placement, think just past it.

Here we have marabou, flash and zonker strip tied in as a tail. Once everything is tied in your thread should be closest to the rear, take 2 turns behind or should I say underneath the tail. You’ll then want to hold the tail up with your hand opposite the bobbin, passing the bobbin around the base of the tail. Just like a parachute post I usually work from the hook up and back down.

Take it a step further and glue it. If I’m in a rush and it’s a fly for myself, I’ll often skip this step. My personal flies often seem to take a back seat to orders. That said if we are looking to make this process even tougher you can use whatever you tied the tail with as a dubbing. Rabbit, scrap from marabou plume base, it will match and save you from digging out another material. You’ll want to dub your thread first and then apply once the glue is placed on the post and wet. Think concrete, this essentially fuses everything together. I like to brush on super glue for this step but just about any glue will work.

For the next tip we’ll cover the benefits of glueing tails. This was first shared with me close to 15 years ago by some striped bass sharpies on the East Coast. The surf and East Coast wind is no place for a fouling fly. Fish long enough at night and you’ll be able to sense the heavier pull a fouled fly creates in a strong tide. It’s also good practice to check your fly often but you don’t want to find the hackles wrapped every time either. It’s slowly becoming more common practice to use this technique. If you’ve seen it great, if not, hopefully it helps. For years we used softex and that’s still my favorite if I’m doing a large number of tails. The consistency is great, soaking in and providing flex but enough rigidness to keep the tail in place. Nowadays we have the luxury of an array of blue and UV light flex glues that work great as well. I find these to be the quickest and easiest. Try your flex glue of choice. It seems every time I share this someone asks, “ How about thin uv?”. Honestly not ideal it’s a bit too brittle and breaks causing a crack.

One of the reasons top of the line saddles are sought after in streamer fish is the stem. These stiff stem saddles add kick, think about a diving board. Don’t have high end saddles, not a problem this is a great hack for strung saddles with softer stems.

There isn’t much that can match the swim of two matched schlappen feathers but they also aren’t terribly durable. This will also help there. Nothing like a streamer that swims like a champ only to have its tail blow out on the first trip.

This step is relatively straightforward. Deceiver style tail tied in place. With softex use a bodkin to lay a bead of glue along the stem, both sides. You’ll want to go roughly ¼ – ½ inch past the bend of the hook. Half of an inch probably being the sweet spot.

With blue light or UV flex glues I find they are often not thin enough to penetrate into the material. In this situation I’ll also use the bobkin to push the glue in.

Before you cure the flex with your light tie any flash you may be using in. Cure the glue and tie on.

Finished flies. Hopefully these tips help. You can never say never in fishing and while not completely foul proof, it helps. Flies that I previously retired for fouling issues or blown out tails usually out live the life of hooks now. It may take a little more time to tie the same fly you’ve been tying for years but we all have a little more time right now.

Happy tying and best of luck to everyone in these tough times.